The names on the 2018 team of the “Notice the Next Generation” project were announced in the Estonian History Museum in Maarjamäe Palace, Tallinn. The team includes young athletes competing in summer and winter Olympic sports as well as non-Olympic sports, team ball games and their coaches.

The core of this year’s next generation team comprises the athletes born in 1995—1998. There is also the “Young and Talented” category for the recognition of the youngest athletes as well as places for the best university athlete, para-athlete and athlete representing Estonian Defence Forces.

The patron of the “Notice the Next Generation” project team in 2018 is bodybuilder Ott Kiivikas. According to Kiivikas, the transition to the adult category can often be difficult and challenging for young athletes.

“Competition among adults is far fiercer than in the youth categories. Proving oneself and reaching the goals one has established can take time. This is the period when recognition and support are important factors for young athletes to help them keep striving for the top. It is essential to know that you are not alone and that someone believes in you. This is what inspires you to move on and use your abilities in the best possible way. I am certain that being a part of the “Notice the Next Generation” project will provide the support these young athletes need, help them build confidence and assure that they are on the right track,” Ott Kiivikas said.

According to the project manager of the “Notice the Next Generation” project team Natalja Inno, the development of youth high-performance sport is certainly among one of NOC’s priorities. “In developing junior sports, the Estonian Olympic Committee aims to contribute to the development of the next generation of Estonian top-class athletes by noticing, educating and supporting the young. Our activities for supporting young athletes and their trainers do not stop at financing. The training course program “Release your tiger!” launched in 2017 is another opportunity for supporting the development of young athletes, which aims to provide talented juniors with the broad knowledge and skills they will need for a break-through and spark motivation for striving to top performance.”

Grants awarded to the core members of the next generation team amount to 2000 euros each, and special grants as well as coaches’ grants are 1000 euros each. The athletes’ grants have been allocated by the NOC while trainers’ grants have been provided by the Cultural Endowment of Estonia. The grants for the best university athlete, para-athlete and athlete representing the Defence Forces as well as their trainers have been financed by a sponsoring company, Estiko.

The Estonian Olympic Committee launched the “Notice the Next Generation” project in 2013. During the last six years, the total financing provided to talented young athletes and their coaches in the project has amounted to 450,000 euros. 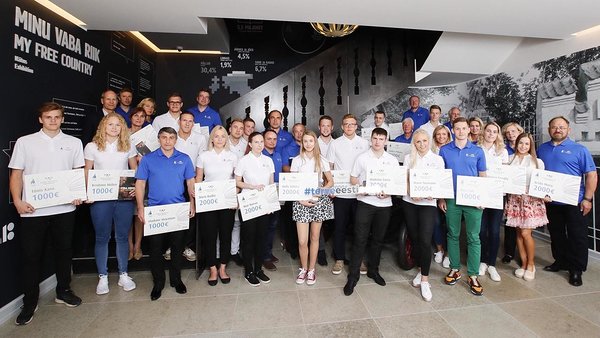